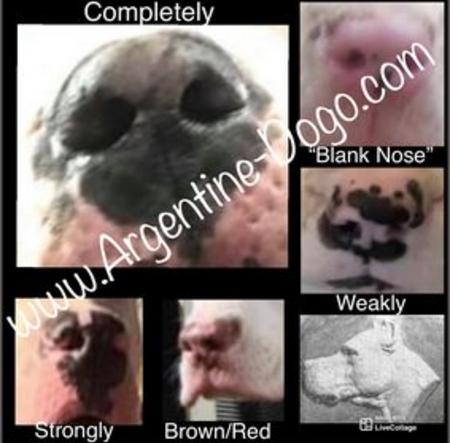 The size of the Dogo is larger than most dogs capable of its level of athleticism, yet smaller than most dogs capable of holding down prey approaching 400lbs.  That is to say the advantage that the Dogo Argentino has over "Fighting breeds" is superior size, and the upper hand over the "Molosser breeds" is its quality of design.  Harmony due to its proportions. The Dogos height is split in two, precisely, at the depth of its chest.  His length is just more that his height at the withers. His bone density is enough to avoid damage during the struggle but not so excessive that it hinders the movement to reach his prey and evade the attack.

The Dogo Argentino is a white dog.  The only patch of color that is acceptable is one that is less than 10% on its head.  However, the patch on the head, unless too large, will never be the concern of the judge unless there are two equal specimens in the ring.  If there are, the whiter one should be chosen.  The Dogos coat is short and smooth.  The skin on the body can show spots of black that may be visible through a thin coat, but spots on the body coat are NEVER acceptable. Working scars should never be penalized.

Tenacious, dominant, courageous, and strong. Never backs down from a challange, whether that be prey in the field or intruder in his home.

The Dogo Argentino is an Athlete, with harmonious proportions.  Slightly longer than tall, but not "long bodied".  The withers are well muscled and powerful, and the highest part of the topline.  There is a slight slope down to the croup, but level from behind the withers to the croup is acceptable.  Both the rear legs and the front legs form perpendicular lines to the ground and parallel to each other.  The shoulders are moderately laid back, and the rear legs are also moderately angulated.  The rear of the Dogo should be powerful as it will be the anchor when the Dogo has hold of a wild boar or puma.  The tail hangs straight down at rest and does not pass the hock joint.

As Inquiries and confusions arise, I will post edits to this page below 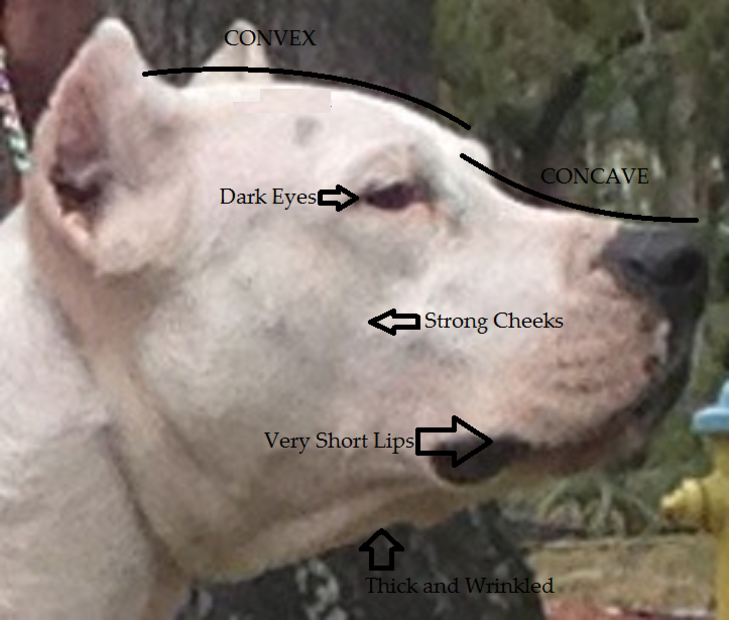 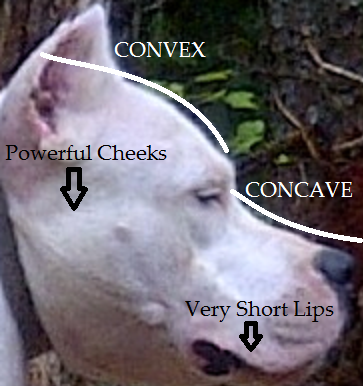 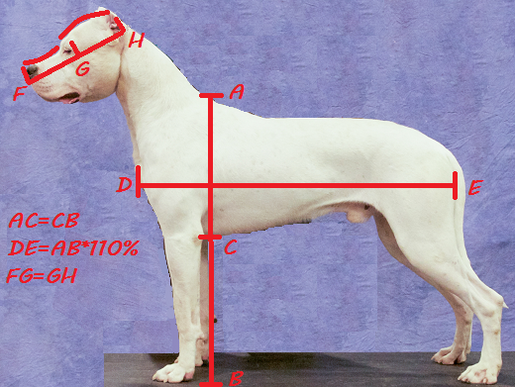 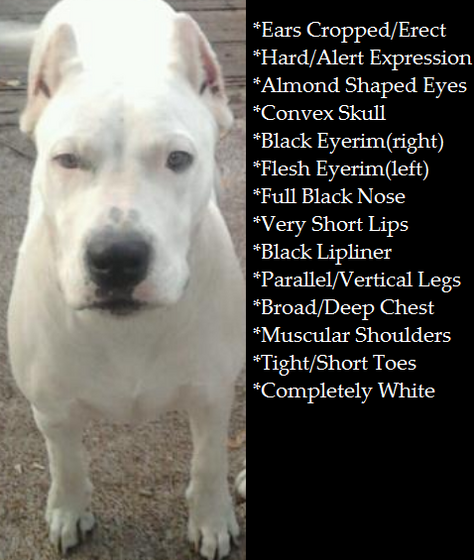 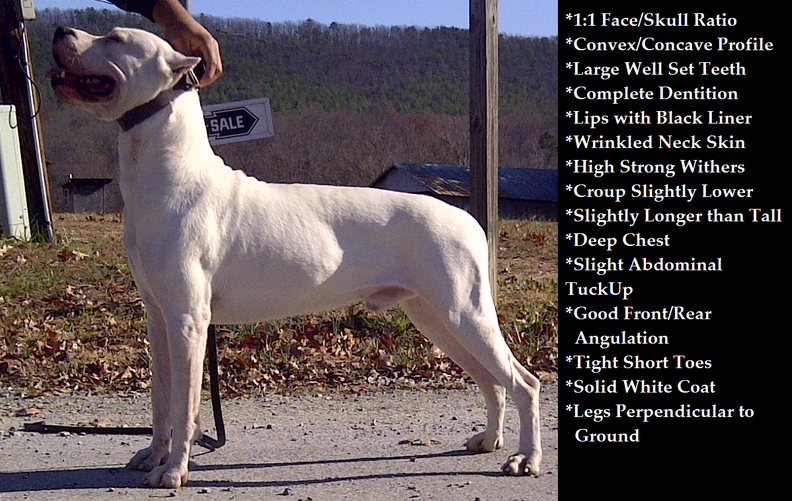 This Judges Education information will be based on the current FCI Standard in conjunction with the current AKC Standard.  This is going to be a Cheat Sheet Style of judges education, it is not designed to replace the knowledge of the standard, but will give visual aids to many of the most important aspects of the Dogo Argentino.  If you have any questions on a detail that has not been explained in this Cheat Sheet, please do not hesitate to email or call us.  We have had the pleasure of having many in depth conversations with world renowned, expert judges and would be glad to help you become an expert Dogo judge too.

Watching the Dogo Argentino move, should be a breathtaking event.  Moving with such ease, but with obvious determination when his attention has been triggered. Always athletic and powerful, with efficiency to use as little energy as necessary. 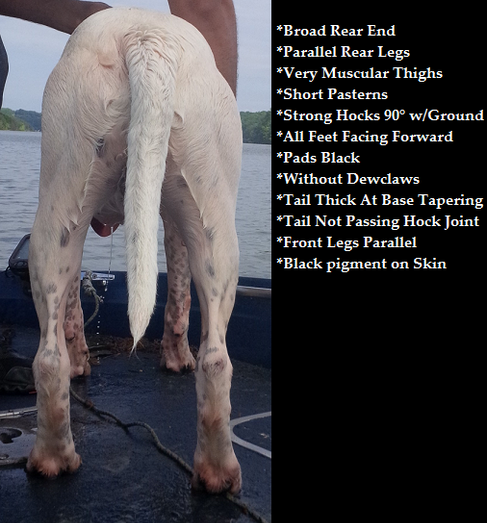 "The Mark of the Breed"

The head of the Dogo Argentino is a finely tuned part, that makes it capable of doing its job with a high level of efficiency.  The skull itself is a scenting type, referred to as "Convex/Concave".

When you view the profile of the Dogos head you will see that the craniofacial axis are either parallel or slightly convergent. Within those parameters, the muzzle will have a slight upturn(may appear flat), never down turned.  The skull has a convex shape which is carried over to the view from the front due to its powerful chewing muscles. The muscles in the cheek are well developed.  The lips must be short, and can NEVER pass the lower jaw.  If they do, this would cause the Dogo to asphyxiate while apprehending his prey. It is also imperative that the upper and lower jaws are of equal length, as this is ideal for the most leverage. The darker the eye color, the better. The nose, eye rims and lip line should be pigmented in black.  The nose MUST be black.

1. Harmony/Balance:  Every aspect of the Dogo        Argentino should fit within this threshold, as no  one part should stand out from the whole dog.

2. Athletic:  The way he moves, the way she  stands, the way their muscle is slightly hidden  under their thick skin. This should all remind you  of a moderately built athlete.

3. Powerful: The muscle and bone fit together in a  package that is designed to overcome the most  difficult of adversaries.  Those who exceed the  Dogos weight by three to four times.

4.Head/Muzzle Ratio:  Repeating the theme of  Harmony and Balance, the head of the Dogo  Argentino should be the perfect blend between

its ability to find game, and hold on to it until the

catch with ease and the ability to find its own prey

5.Movement:  There must be complete ease and

fluidity about the way the Dogo Argentino  traverses land.  Using as little effort as possible,  while still covering much ground.

6.Rusticity: Being rustic is an invaluable attribute in

this breed.  It is the Dogos ability to adapt to any  environment or situation that is presented.

The muzzle represents aprox. 40% of the whole head